Scarlett and Ryan, Single–Tell Us Why You Should be Their Next Boyfriend/Girlfriend 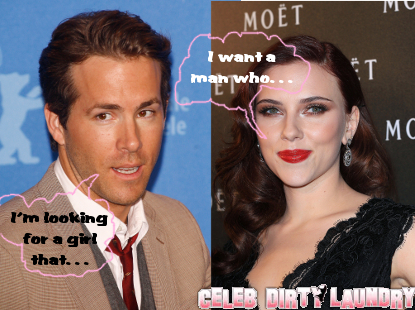 All right, guys and gals, if you think you have a shot at a relationship with either Scarlett Johansson or Ryan Reynolds now’s your shot because their divorce has just been finalized. They’re both officially back on the market. Now, we’re not saying either of them are ready to jump right back into a relationship, we just wanted to report to you all that . . . They are two cool-cats that are SINGLE-aroni.

Earlier today, final divorce papers were filed at the L.A. County Superior Court (Hey, I wonder if LiLo remembers that place? BTW, we hope you’re being a good girl, LiLo!).

Sources have said that both Scarlett and Ryan agreed to file for divorce. There was no prenup, nor was there any spousal support, so all property and earnings acquired during their three year marriage will be divided 50/50.

Well, at least the divorce never got ugly!

So, being that the divorce was just finalized, we should probably give them some time to themselves, right? Nah, they don’t need time. They need themselves some new lovin’! So tell us why either Scarlett or Ryan should choose you as their future boyfriend/girlfriend. Click on the link below to take our survey!