Scarlett Johansson and Sean Penn Have Broken Up 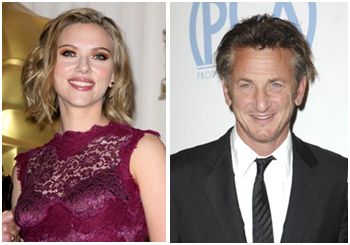 Scarlett Johansson, 26,  shocked every women in the world when she dumped Ryan Reynolds and then shocked them again when she started dating Sean Penn, 50.   Scarlett and Sean have been dating since Jan or Feb this year but it seems that those reports that Sean was being a bad boy at Cannes Film Festival may be true.  Sources say he was seen with a blond and brunette in the elevator at a hotel in Cannes and they looked like they were more than friends.

People magazine is reporting that Scarlett and Sean are split, “Speculation about the pair began after Johansson did not attend the Cannes Film Festival with Penn for his movie The Tree of Life. She has been working on The Avengers in New Mexico, reprising her role of Black Widow from Iron Man 2.  The reason for the split wasn’t immediately known. Reps declined to comment.

He may be a brilliant actor but I am not sure what she ever saw in him.  Why or why would she dump Ryan Reynolds and take up with someone old enough to be her father?