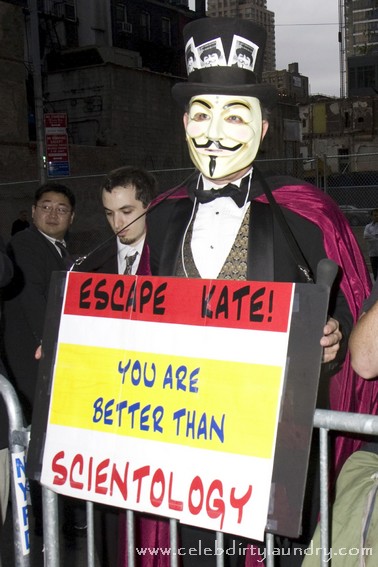 Scientology is a secretive organization that does not play by the rules.  It is neither a religion nor a regular business nor exactly a cult.  What it in fact resembles most closely is an organized crime syndicate with an aggressive recruitment policy.  The following horror story provides some insight into the workings of this evil empire.

Daniel Montalvo, a former Scientologist, is suing the Church and it’s offshoot, Sea Org, for damages exceeding $25k for Breach of Fiduciary Duty and Negligence.  In his lawsuit, Montalvo alleges Sea Org engaged in slave labor practices – forcing him to work over 100 hours per week when he was a minor for between $25-$50 per week.

He also alleges negligence, claiming that he only went to school one day a week while under the organization’s care, and that he lost a finger while working for the Church.  In addition to the ‘Church of Scientology’ Montalvo is also suing his parents, Luis & Veronica Montalvo and several church employees.

Daniel claims his troubles began in 1996 when his parents became members of the Sea Org, handing their young son’s care over to the church’s representatives.  The lawsuit states: “Sea Org members adopt a paramilitary lifestyle in which they wear navy-style uniforms and hold ranks such as captain, lieutenant, and ensign. Pursuant to Sea Org policy, which prohibits Sea Org members from raising their children, in or about 1996, Luis and Veronica ceded custody of Daniel to Cadet Org, a children’s division of the Sea Org.”At the age of six, Daniel was first made to sign a purported billion year contract binding him to the Sea Org.  At the age of twelve, Daniel joined the Sea Org, signing a second purported billion year contract.”

Daniel says that while he was in Sea Org, he wasn’t allowed to watch the news, or have any Internet access, and that he only went to school one day a week.”Daniel’s school attendance was generally not enforced,” the documents state. “Rather, Daniel was permitted to attend school for approximately one day a week if his school schedule permitted and if he chose to do so rather than having precious free time (i.e., not working).”

The documents claim: “When Daniel’s teachers attempted to enforce attendance requirements, they were generally overruled by Daniel’s Sea Org superiors.”Daniel says he regularly worked 40 hours per week – but often it was more than 100 hours of work – and that he was paid only $25.00-$50.00 per week, and that he didn’t have a work permit, something that is required for a minor.

He goes on to state that he “was ordered by his Sea Org superior to do construction work for one of it’s agents and alter-egos, The Pacific Estates Project Force… In this job Daniel, then fifteen years old, operated scissor lifts and other heavy equipment, and at times was required to work continuously for days without sleep.  During this time he was paid $25.00 per week.”Then, it is claimed that when he was sixteen, while he was working at Bridge Publications, the publisher of non-fiction works of L. Ron Hubbard, on January 20, 2008:  “Daniel tried to clear a paper jam in the machine and accidentally pushed the foot pedal, which brought the blade down, cutting off his right index finger between the top and middle knuckle.”

The lawsuit further states that: “On information and belief, Bridge’s notching machine did not have reasonable safety features, and at least two other employees had been injured while using the machine.”Daniel says that following the accident no ambulance was called and that he was instead driven to the hospital by one of the Sea Org agents.  He says that he was instructed to tell the doctor that he was working as a volunteer at a publishing company and specifically not to mention his connection to the Church Of Scientology.

Furthermore, Daniel claims that he was never offered any form of compensation by Sea Org for the loss of his finger or informed of his rights to claim workers comp for his injury.  The documents also note: “Federal labor provisions prohibit employers from allowing minors under eighteen years of age to operate paper-products machines and machines with guillotine blades.”  Daniel decided to leave the Church last September, taking with him “certain information stored on five hard drives that Daniel reasonably believed necessary to protect himself from retribution by the Church and to support his claims against the Church.”

He claims that he tried to contact his mother in October but that his call was put through to a Sea Org superior, Kendrick Moxon. The documents state that “Moxon instructed Daniel that he would be his only ‘terminal,’ meaning Daniel could speak to Sea Org members only through him.”

Daniel says that Moxon requested he returned to Sea Org to face allegations that he had taken the five hard drives.  He says that he was assured he would be supported by Sea Org and they would “work it all out”. Instead, according to Daniel, he was taken to the Los Angeles Sheriff’s Department, and subsequently charged with felony grand theft.  The lawsuit states: “Every adult in Daniel’s childhood failed him, and society’s safeguards against such misconduct overlooked him (or were concealed from him). This complaint seeks to recover for these great wrongs.” This is not the first time the Church of Scientology has been accused of engaging in slave labor.

John Brosseau, a 30-year member who has since left Scientology, made a series of shocking allegations against the church in an explosive interview with The New Yorker.  It has since emerged that the FBI has launched an investigation into the church for using free labor, in part, according to former Scientologists, to service the demands of its celebrity icon and top spokesman, Tom Cruise.

Brosseau claimed he worked on two motorcycles, an airport hangar and a lavish, luxury, custom built SUV for the actor –  all while he was getting paid $50 a week while “supposed to be working for the betterment of mankind”.  The church also gave Cruise ‘Silver Screen’ – a trailer-style bus – which was made for him using “slave labor,” according to the church’s former Inspector General, Mark Rathbun.

Cruise used the luxury vehicle as a base for lover Katie Holmes to begin her ‘Purification Rundown Program’, a controversial detoxification and introductory program developed by L. Ron Hubbard.  The church has insisted whatever benefit Cruise received from it “pales in comparison to the benefits the church has received from Mr. Cruise’s many years of volunteer efforts,” according to spokesman Tommy Davis.  Meanwhile, Cruise’s attorney says that “the Church of Scientology has never expended any funds to the personal benefit of Mr. Cruise or provided him with free services.”

There is no reason that we should allow Scientology to continue to operate as if they were a decent law-abiding organization – they are not – and this is evident as soon one examines the facts.  Scientology should be OUTLAWED!