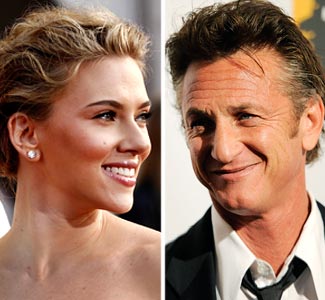 Sean Penn and his new girlfriend Scarlett Johansson were so disgusted by what they perceived as Sharon Osbourne’s loud and obnoxious behaviour during a recent dinner date, they asked to be moved to another table away from the star.

The TV family matriarch was dining at a top celebrity restaurant full of A-list patrons and Penn and Johansson were seated next to her, but after overhearing Osbourne’s crude and loud conversation, the pair implored staff to move them further away.

Sharon tells CNN’s Piers Morgan, “Last night we were out at this restaurant and it’s full of every superstar you can think of and this one certain superstar – couple of superstars – sat at a table next to mine… and they moved tables because we were too loud and disgusting.”

When Morgan asked the reality TV star, “That wasn’t the restaurant Sean Penn and Scarlett Johansson were in was it by any chance? I don’t blame them… .”

Ozzy Osbourne’s wife then hung her head in her hands, before adding, “They were looking at us like, ‘Oh, please.’ And I’m like, ‘Oh, shut up, get a sense of humour’.”

Sean Penn is a wierd guy – one the one hand, he praises Hugo Chavez, the brutal communist dictator of Venezuela, and then on the other hand he dines in expensive Hollywood restaurants with super-starlets – what a phony.