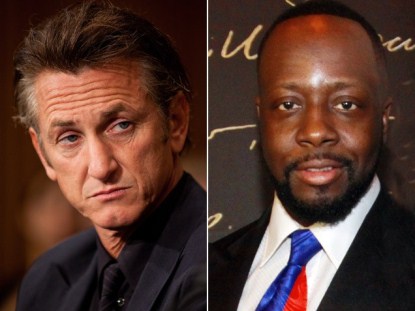 Sean Penn and Wyclef Jean have kissed and made up in a united bid to promote aid efforts in Haiti.  Wyclef star fell out with the brilliant actor after Sean criticised him for running for presidency of Haiti after it was hit by a devastating earthquake in 2010.

Wyclef hit back by accusing Sean of drug abuse but the pair made up after meeting by chance at a performance by Haitian band T-Vice in New York on Friday.

An inside source says, “They were both in the venue, and when they saw each other at around 1am, they started a confrontation.  Things seemed pretty tense, and everyone around them was nervous.  They then asked staff if they could go somewhere private, so they were led into a dressing room backstage where they could be alone and shut the door. “They weren’t yelling and screaming, but they had it out and aired their differences for 30 minutes. When they came out they hugged each other, they went onstage and stood side-by-side.”

Sean then confirmed the falling-out was over by paying tribute to Jean and Haitian presidential candidate Michel Martelly, telling the audience: “In Haiti, we have got an opportunity as Americans whether you are from Haitian diaspora or pr**ks like me… .  These two men beside me will lead the way if you support them… let’s move on for some fun.”

Having the political support of Sean Penn, a supporter of the brutal dictator of Venezuela, Hugo Chavez, is at best a mixed blessing.