Secrets From The Italian ‘Jersey Shore’ Set — Behind The Scenes 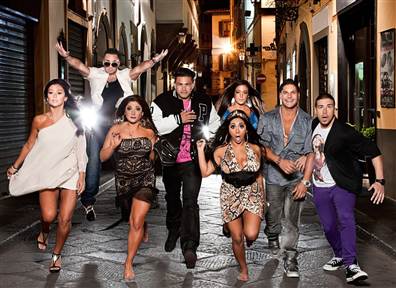 Thought you knew everything there was to know about the cast and inner-workings of  Jersey Shore? While you might be the Guido Guru, chances are you didn’t know these five things about the upcoming season, which was filmed in Italia!

Secret #1: The cast lives like pigs. Sources say Ronnie and The Situation’s room had bits of uneaten (or half-eaten) food tucked in the corners. Blocked sinks, too. GROSS.

Secret #2: They lived in a bank-turned-temporary-apartment during the filming of the show. Each cast member shared a room, while there was a special room known as the “Smoosh Room” that remained empty. [If you do not know what “smoosh” means, then you need to get Guido-fied and indulge in some Jersey Shore]

Secret #4: Each person only gets ONE private phone call a week. The rest a filmed for your viewing pleasure.

Secret #5: Snooki’s prized stuffed animal, Crocodilly made it onto the flight to Italy. The Snooks doesn’t go anywhere without her bright green plush friend!