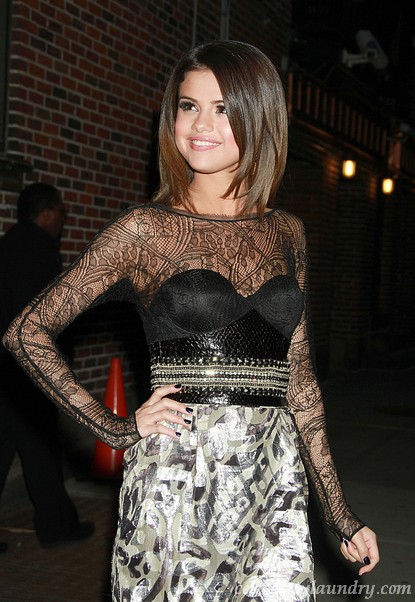 She’s not giving up all of the details about their private romance, but she gave us a hint. When Dave asked her if he could show the audience a photo of them together at the Vanity Fair party, she said, “Oh, that’s cute.” Afterward, the audience gave a big “Awww!”

When he asked her if they were really an item, she said, “It was like a little prom night, wasn’t it?” He said, “Looked like it.”

He went on to say, “You guys look very happy there. How long have you known him?” She replied, “Uh, almost, like, ywo years now.”

He said, “Two years? Where did you meet? People gotta meet somewhere, right?”

She said in response, “Actually, his manager called my mom, who’s my manager.” Dave said, jokingly, “I heard he was your paper boy.”

Selena added, “I’m blushing! He’s been in my life for so long, and it’s just nice to have someone that understands what you’re going through.”