Selena Gomez’s Parents Are Very Angry With Her 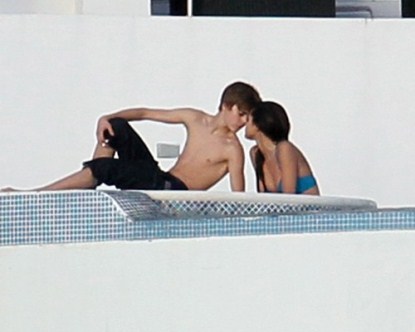 Disney actress and singer Selena Gomez, 18, has made her parents very angry.  It seems her parents are very unhappy with her and the absense of her purity ring.  She has worn the purity ring for six years and it is a promise that she will remain pure and abstance from sex untill she marries.  Selena is currently rumored to be in a hot romance with Justin Bieber,16, and the purity ring has disappeared.  The two were spot kissing while in St. Lucia.

The National Enquirer reports: “When the ring came off, Selena’s parents became unglued.  Selena got the ring at 12 and never took it off “But when things started getting hot with Justin, suddenly she was wearing it less and less.

Selena’s family thinks the world of Justin and isn’t opposed to them dating. But they’re very conservative people and they’d be heartsick if she did something with him that she’d later regret.  The family has even gone as far as having people in her entourage report back to them when she spends time with Justin. Selena hates being spied on, and that’s pushing her away from her family.”

Poor Selena  the parents spying and every Belieber mad at her –  almost seems like it is not worth dating Justin Bieber.