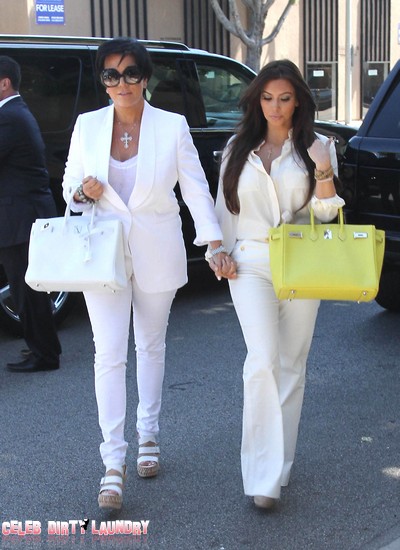 Kim Kardashian‘s sex tape release in 2007 resulted in a horrible scandal that had Kim and her dear mom, Kris Jenner, weeping in each other’s arms for days.  All the details of this tragic period in Kim’s life are made plain in Kris’ new book ‘Kris Jenner… And All Things Kardashian.’ Imagine the grief of a mother learning that her dear daughter’s most intimate sexual moments were going to be made available to be seen by every lech on the Internet?   Well that is exactly what happened to Kris.

As the The Sun revealed in their excerpt of Kris Jenner’s book ‘Kris Jenner… And All Things Kardashian’’ Kim’s sex tape was traumatic for the entire family and had Kim and Kris bawling in each other’s arms for days on end.   Read how it happened below:

“I made a tape with my boyfriend and it’s going to be released”, Kim told Kris sobbing.

It was the sex tape which became a global sensation after being leaked on to the internet in 2007. And it still haunts the reality TV star and her family to this day.  Now, in a revealing new book, Kim’s mom Kris Jenner tells how she helped her devastated daughter cope with this new-found worldwide infamy.

The 56-year-old says: “Kim told me, very seriously, ‘Mom, I need to talk to you’. She immediately burst into tears.  ‘I made a tape with my boyfriend and it’s going to be released.  What do you mean a tape? I started grilling her like a detective. Explain what a tape means? What is this tape? ‘We were on vacation’, she said. ‘We were at the beach and then…'”

“What do you mean? I practically screamed. Were you wearing any clothes? She shook her head, then said, ‘I know they have us having sex on the tape.'”

“I couldn’t believe my ears. I felt like I was going to faint. I asked why she would do that?’ ‘I don’t know, Mom’, she said. ‘We were just being stupid. It was dumb.  Hell, yes, it was dumb! Still, all I could think about was how to stop the tape from being released.”

Kris says that out of Kim, 31, and her sisters Khloe, 27, and Kourtney, 32 — all made famous thanks to their hit reality show Keeping Up With The Kardashians — it is Kim who has always caused her this kind of trouble.

And, according to Kris, the beautiful telly star’s recent doomed 72-day marriage to basketball player Kris Humphries was just another example of the kind of mess she often gets herself into.

In her book, All Things Kardashian, Kris recalls how she went into damage limitation mode after Kim’s shocking news about the sex tape, which was made with her then boyfriend, singer Ray J.

A devastated Kim told her an adult entertainment company had the tape and, as it had been leaked on to the internet, there was nothing her family could do to ban it.

Kris writes: “It’s everywhere. Forever. And now the production company was planning to release the tape globally. It was a horrible time for our family.”

“That kind of thing is devastating, embarrassing, expensive and draining. Kim and I cried for days.”

“We were so upset and anxious. Kim knew she’d made a huge mistake and she had disappointed her family. She was so embarrassed that anyone saw her like that.”

“A friend referred me to a publicist who would take Kim on. She was so comforting. ‘It’s going to be OK’, she told Kim. ‘You’re not the first person to have a sex tape and you won’t be the last’.  A media firestorm erupted with Kim at its centre. Sex tape, sex tape, sex tape, that’s all we heard for a long time. We ended up settling out of court. Life went on.  When the dust settled I sat Kim down, not to preach, but to advise. ‘Kim, you know now that you can never, ever trust anyone ever again’, I told her.”

Cynical blogs jealous of Kim’s great fame and fortune like to insinuate that her sex tape was intentionally leaked by her for profit and publicity – but there is in fact NO evidence to support such assumptions.

What do you think? Did Kim intentionally leak her own sex tape? Sound off in the comments below.