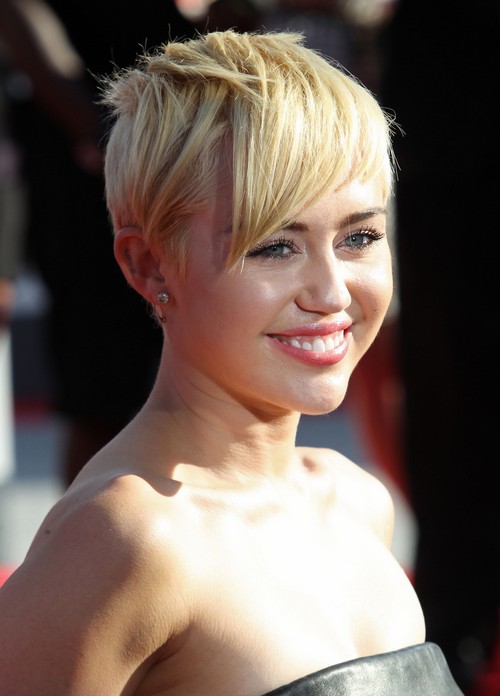 They say that sex sells – but that doesn’t seem to apply to Miley Cyrus. Once squeaky clean and the biggest of Disney’s young stars, Miley Cyrus’ transition from child to adult star is not looking to be as easy as she would have hoped – her fake breasts don’t seem to help.

In the end numbers don’t lie and Miley has seen her sales drop as she takes on a racier image.  Since the finishing with ‘Hanna Montana’ Miley has gotten 9 tattoos and was filmed getting high smoking from a bong.  The decline in her sales is real evidence that a grown-up edgy Miley might not be a better Miley.

“Miley Cyrus should aspire to be on that level and the first step is hard work. Unfortunately, it seems she isn’t far from the path many young adults follow: exploring adulthood; testing the boundaries around them; and flirting with danger through reckless behavior.”

“I believe for the young fans who have grown up with her, while she is trying to assert her independence, she is alienating this one-time target audience,” explained Michelle Groover, Public Relations Professor at Georgia Southern University.

“With ‘Hannah Montana’ still airing on ABC Saturday mornings, her fans are confused by what they see on the program with what they see on an entertainment website, a magazine they see and/or hear their parents discuss. Many of her fans are too young to understand the difference between the actress as a real person and the role she plays on the show.”

“The road ahead for Miley is to master her craft. Whether her future lay in music or acting, she needs to be studying at the feet of the best producers and directors there are, and also, watching the older artists and performers around her to learn from their mistakes as well as their successes.”

“At this point, Miley could be a flame, or flame out.”

I guess that because sex is so oversold already in Hollywood that Miley might well do much better to keep the clean innocent image.