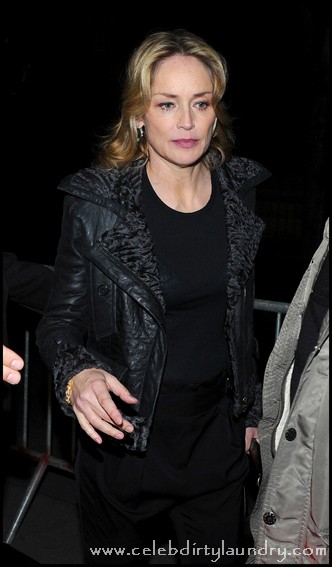 Sharon Stone has just obtained a restraining order against an “obsessed mentally unstable delusional person,” after the man broke into her Los Angeles home and was lying in wait for her.

Court documents indicate that the delusional man, one Bradly Gooden, believes that he is the son of Hillary Clinton and that he wrote the screenplay for “The King’s Speech,” and that he did it at the age of 2 years.

Stone states: “I am in fear from Mr. Gooden for my personal safety, and that of those around me, including especially my children and family, as well as my friends and employees.”

Bradley broke into Sharon’s house on February 11 and police found Gooden inside Sharon’s home.  He told officers at the time he had traveled from Ohio because he believes his mother, Hillary Clinton, bought him the house from Sharon Stone as a gift.

Bradley told the bemused police when he was arrested, “It’s now my house – I live here.”

Doctors say Bradley was placed on a psychiatric hold and released three days ago but he “seems undeterred from returning to the property,” according to court documents.

A judge granted a temporary restraining order which prohibits Bradley from going within 100 yards of Sharon or her children.

Sharon has been through this before – in 1998 she filed for a restraining order against an overzealous Italian but she eventually dropped the request after the man’s family took him back to Italy.