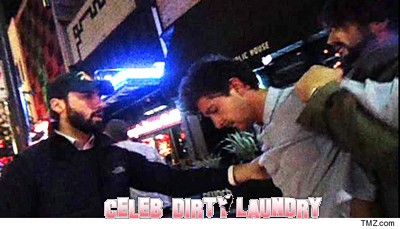 Shia LaBeouf took a beating from a shirtless bully in Vancouver on Friday – after he and the other patron, known as Mike, were thrown out of a bar by security.

Shia had been boozing it up at the Cinema Public House and was apparently getting too obnoxious when fireworks erupted. Shia got into a brawl with Mike inside the bar and then he and ‘mystery Mike’ got tossed out onto the street. It was there that things got really ugly – after Shia and Mike were ejected – Mike spotted Shia waiting for a taxi and attacked him! The wild man tore off his shirt and unleashed a flury of punches all over Shia’s face, knocking him down to the curb easily.

A witness said: “He got into a confrontation with a couple of people. He took a few punches to the face. He was obviously pretty intoxicated.”

Bystanders intervened to help Shia but found it difficult to calm the 25-year-old down. One man in particular has to stop Shia from chasing the shirtless man down the street after he got up off the ground. Good thing for Shia since he was so obviously overpowered by shirtless Mike.

The source added: “The guy had to tell him something like ‘calm down or I’ll have to lay you out.’ Then Shia just put his hands up and gave up.”

This isn’t Shia’s first bar fight – but it should be his last! The dude can’t hold his liquor and he can’t fight!

In February, he was handcuffed after an altercation outside the Mad Bull’s Tavern in Sherman Oaks, California which was reportedly sparked when a reveler called him a “f***ing f****t” – but he dismissed the incident as drunken horseplay.

He said: “I walked out to have a cigarette. I was away with some friends. Some guys instigated me and that’s what it was. Some name calling.”

“I didn’t know them. It was just an awkward situation. I’m not trying to challenge anybody either, I was just there with my friends. People get drunk, people get crazy.”

The fight ended when a security guard put the actor into a headlock and handed him over to police officers who were nearby, although no charges were made and no one was arrested.

Shia was also arrested for driving under the influence (DUI) in 2007 and was charged with misdemeanor criminal trespassing in 2008 after being found to be intoxicated in a Walgreen’s pharmacy in Chicago.

Somewhat ironically, Shia is in Vancouver shooting the film titled ‘The Company You Keep.’