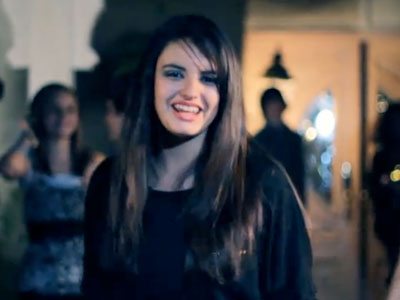 Rebecca Black is best known for her music video for her song “Friday”.   Most people have harshly criticized it, calling it the worst video ever.   The 13-year-old singer is getting death threats over this pile of crap.   She revealed that she is getting all kinds of hate mail, including people on Twitter telling her to die.   This publicity has captured the attention of none other than Simon Cowell.

“I love Rebecca and the fact that she’s gotten so much publicity. I want to meet her,” Simon told People.   This is some of the first positive feedback for the song.

Currently “Friday” has about 24 million views.   It also made it into iTunes top 100 songs of the week.    Rebecca has said that she would love to do a duet with Justin Bieber, but only time will tell how long this young singer’s career lasts.