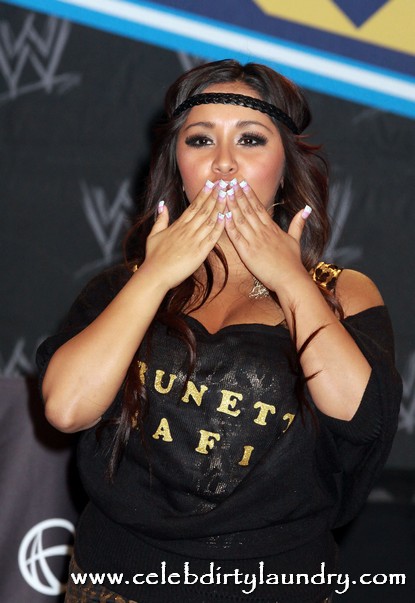 Nicole Polizzi aka “Snooki” tweeted the inevitable:  So I can FINALLY Announce….I Got My Own Spinoff! #SnookiRevolution   It was only a matter of time before Jersey Shore spinoffs sprung up like Pauly D’s blowout.   Polizzi often campaigned to have her own spinoff entitled Snookin For Love.   Unfortunately for Snooks, it appears MTV doesn’t plan on helping her find a big Guido Juicehead.

According to the link posted in Polozzi’s tweet, the new reality show will highlight the adventures of Snooks and her BooBoo – Jenni “J WOWW” Farley.   This show will follow their friendships, love lives and drunken nights out. MTV also has plans for a second J Shore spinoff:  following the life of Pauly D and his childhood pals as he tries to make it as a DJ.

What are your  thoughts:   Two fist pumps?  Or does the J Shore franchise need to end it as bad as Ron and Sammie do?