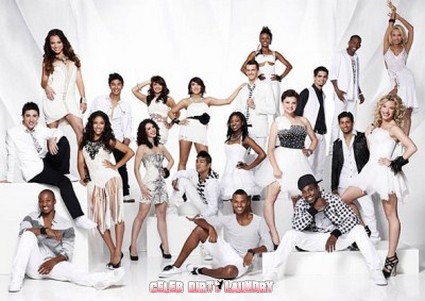 Last week, Nigel surprised viewers and sent nobody home on the first official results show.  Tonight, the top 20 perform again and tomorrow night, 2 couples will be going home. If you missed last week’s recap, you can catch the so-called results here or the performances here.  The recap tonight is being brought  to you by Rosie over at Fit Fab Celeb!

Tonight, the dancers reveal dirty little secrets about each other, here they are: Ricky’s name is Roderick, Ryan’s leg hairs grow fast,Caitlin has nasty feet, Mitchell likes to wear his zebra Snuggy, Wady likes to use ladies hair removal cream on his chest, Missy has a funny laugh, Iveta talks to herself in the mirror, Nick wears shorts all the time, Robert thinks he is a pro wrestler, Miranda has a crush on Tadd, Clarice sleeps with her eyes open, Jess draws stick figure orchestras, Jordan isn’t the brightest crayon in the box, Tadd is a clean freak, Melanie has a big issue with people touching her ears, Marko loves to read romance novel, Sasha sweats like a dude, Alexander loves to look at himself in the mirror, Chris makes a creepy smile when he gets nervous and Ashley thinks she has swag and doesn’t.

The special guest judge tonight is, Broadway veteran, Debbie Reynolds. On with the recap:

Fit Fab’s Best Performance of the night: Ryan and Ricky

Come back tomorrow night to find out who are the two couples to get the boot and appear on The Ellen Show.