Sorry Fellas, Taylor Lautner Is Not Actually Coming Out, Despite The Fake ‘People’ Cover 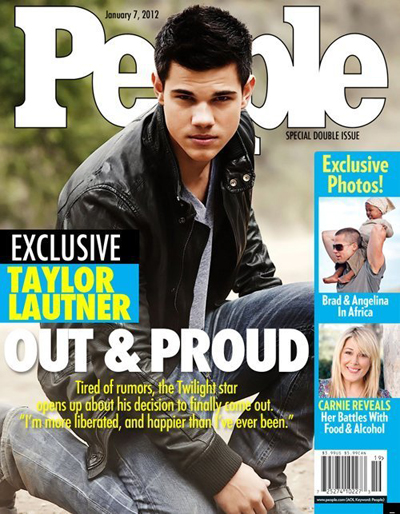 Taylor Lautner is not gay, but, apparently, someone with a mastery of Photoshop wishes he was! Earlier this week, a mockup of a January People Magazine cover featured a photo of the Twilight star with the headline “Out and Proud.”

“Tired of rumors, the Twilight star opens up about his decision to finally come out. ‘I’m more liberated, and happier than I’ve ever been,’” read the copy on the magazine.

However, much to the relief of Taylor’s tween fangirl base, both People and Gossip Cop have debunked the cover as a fake, but not before many people saw it and believed the story to be true.

Music mogul Russell Simmons even Tweeted, “proud of Taylor Lautner for his bravery and his courage,” before retracting it later. “Disappointed that people would joke about someone coming out about their sexuality. Let Taylor Lautner be whoever he wants to be…”

Reportedly, Taylor denied being gay in an interview with Australian GQ last month, so we guess we’ll just have to take his (and not the claims of fake magazine covers) word for it.