Spencer Pratt Is Desperate To Intern for Ryan Seacrest 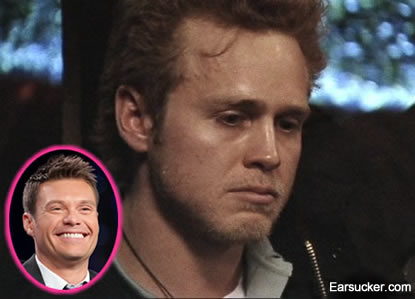 Famewhore Spencer Pratt who has a reputation of doing anything to get publicity and extend his 15 minutes of fame has said he is desperate to get an intern position with Ryan Seacrest.   Spencer wants to revamp his image and thinks an intern position with Ryan on the radio will help repair it and give him more credibility and likability.   His next career move was suppose to be to become the new KFC spokesperson and they  planned to use his music track Ain’t No Thang But A Chicken Wing.  Guess that didn’t work out!

He reportedly wrote an email to Ryan’s talent agent, Amy Sugarman, asking for the chance to work for Ryan. He told her, “I’m trying to change my image and make myself more likable.”

Good luck with that one! Let us know how that works out for ya!

Thursday, he called in to discuss the idea with Ryan. He said, “How do you go from being hated to even a little bit likable? It’s about who you’re around. I’ve learned you need to be around likable people to even start to be likable. Who’s the most likable person in America, if not the world?   That would be Ryan Seacrest.”

At least the dude has a sense of humor.  Ryan has been known to help these “wanna bes” so ya never know.  What do you think – can Spencer go from a no talent, fame whore to nice guy?  Somehow I doubt it!