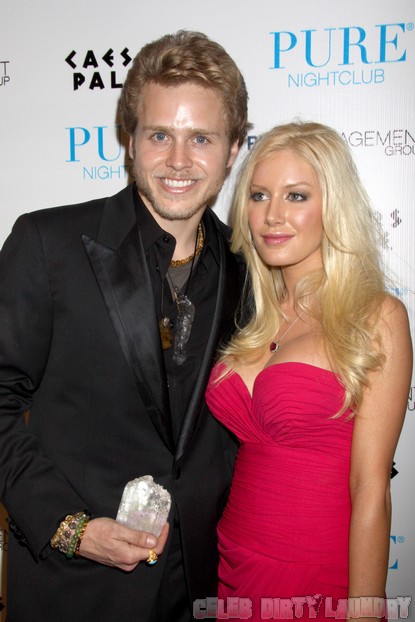 Spencer Pratt and his famewhore wife Heidi Montag made a LOT of money off of their public image, so when Virgin Mobile manufactured their fake couple Sparah, Spencer was miffed, natch.

As a matter of fact, Spencer and Heidi, dubbed Speidi in the media, posed together for countless photo opportunities. They’ve posed for magazine covers, photos of them of looking at said magazine covers, Taco Bell, the park — you name it.

Now that Virgin Mobile has manufactured Sparah, Spencer thinks it’s a blatant ripoff of the image that they’ve cultivated. No one steals the famewhore spotlight from Speidi! TMZ has more of this craziness:

If you haven’t seen the commercials … Virgin Mobile’s new ad campaign is built entirely around a fake Hollywood couple called “Sparah” — a mashup of the names Spencer and Sarah — and Pratt is pissed he and Heidi have become the target of a national joke … with no paycheck to show for it.

According to Spencer, Speidi’s getting ripped off — telling us, “They should being paying for using our likeness. It’s obvious they are trying to be us.”

Pratt doesn’t stop there — adding, he and Heidi “hate” Sparah … “It’s nuts how much [Virgin is] promoting them, when they are obviously copying us.”

I much rather read about Sparah, knowing that they’re fake from the get-go. Speidi were trying to be real and lying to everyone all along.