Star Magazine: Angelina Jolie Explodes and Tells Brad Pitt To Get Out! 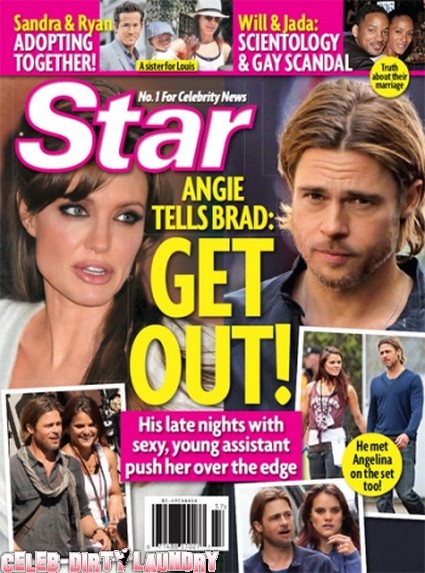 The September 12th issue of Star Magazine features Angelina Jolie and Brad Pitt.  This is a story I have seen recycled about 100 times.  This time the magazine claims that Angelina explodes at Brad and tells him to get out!  His late nights with his sexy, young assistant push her over the edge.   Of course she is suppose to be super jealous because she met Brad on a movie set and this girl is on a movie set.  So they are putting one and one together and getting …..  If Brad and Angelina broke up as many times as the tabloids reported they would need a revolving door.

My guess is it was a slow news week and this is just pure speculation on the part of Star.  Rumors about this girl have been circulating the internet for weeks now.

Also in this issue the magazine claims that Jennifer Aniston and Justin Theroux have had their first fight.  Boo Hoo, the first they should consider themselves lucky LOL.  Star should really touch base with OK! Magazine because they have Jennifer making love with Justin and not war :-)

If you need a copy of this week’s issue of Star Magazine it is on stands now!