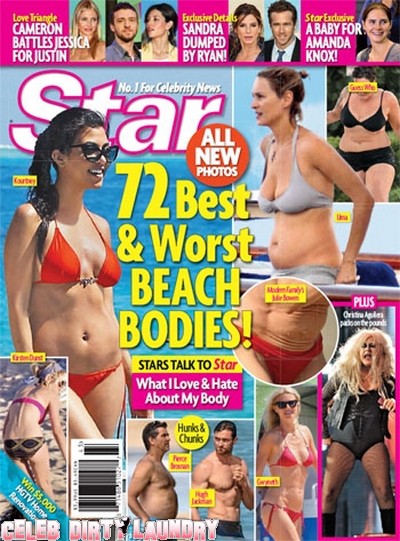 The October 17th issue of Star Magazine features the cover story“72 best and worst beach bodies.”  The magazine has the beach body showdown, they show the best and the worst bathing suit bodies and all the pictures.  They have pics of the hunks, Hugh Jackman and the Chunks, Pierce Brosman.

Star claims they have spoken to stars and they reveal ‘What I love and hate about my body’  The magazine is not only picking on the dudes bikini bodies they have Julia Roberts, Kristen Dunst and more.

They also have pictures of Christina Aguilera who poured herself into a tight one-piece to pay tribute to the late King of Pop with the headline ‘she is packing on the pounds’  Not sure what was going through her head when she was planning this outfit for the concert.

The magazine also claims to have the exclusive details on Sandra Bullock being dumped by Ryan Reynolds.  They also have all the details about how he is sneaking around with Blake Lively.

If you want to find out about all this, see all the pictures and more, pick up the current issue of Star Magazine.