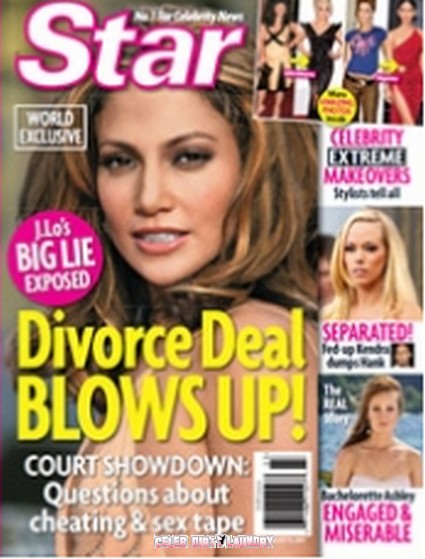 The August 15th issue of Star Magazine features Jennifer Lopez and the magazine claims it has ‘J-Lo’s Big Lie Exposed.’   Blazoned across the cover “Divorce Deal Blows Up – Court Showdown: Questions about cheating and sex tape.”   The magazine claims they have the dirt about the breakup of Jennifer Lopez and her ex Mark Anthony.   Rumors surfaced two weeks ago that Jennifer was cheating with William Levy, a sexy model who stared in her “I’m Into You” video.  At the same time rumors circulated that the marriage was doomed a long time ago due to Marc’s adultery.  So apparently Star now has the all the info!

The magazine also claims a sex tape but I am wondering if they are alluding to the honeymoon sex tape Jennifer made with her first husband Ojani Noa.  Jennifer Lopez recently won the latest round in the home video footage battle with her ex-husband, after a judge ruled the case will be heard in a private.

Also in the magazine they claim that Kendra Wilkinson who is married to Hank Baskett Wilkinson for almost three years have separated.  According to Star Magazine Kendra has ditched her ring.  To find out all an more the issue of Star Magazine is on stands now!