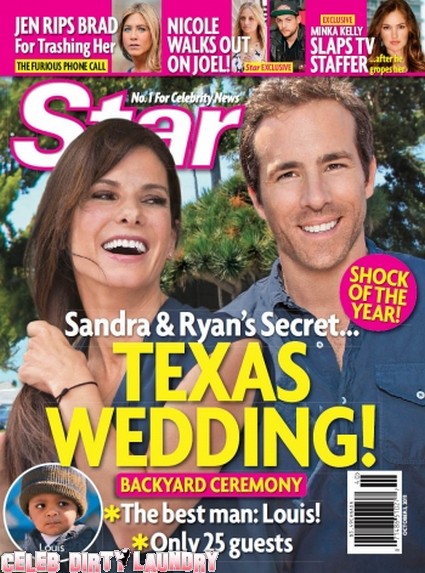 The October 3rd, 2011 issue of Star Magazine features the cover story ‘Sandra and Ryan’s Secret… Texas Wedding’.  The magazine is claiming that Sandra Bullock and Ryan Reynolds want to get married in a secret backyard ceremony.   Apparently the two talked about walking down the aisle during their Wyoming vacation.  They plan to have only 25 guests attending their big day and her adopted son Louis will be the best man.

Star magazine has more: “Ryan told her he was ready to tie the knot whenever she wants,” a source told the magazine. “And after seeing how quickly she’s bonded with baby Louis, she decided she’s ready to pull the trigger, too. So they started discussing the logistics of pulling off a low-key, barefoot wedding that would reflect their laid-back lifestyle.”

I hope it is true, Sandra deserves some happiness after her last douchbag husband Jesse James!  Also featured in this week’s magazine Kim Karashian and Kris Humphries marriage is getting worse according to Star. The tabloids have been rumbling the past two weeks that maybe there is trouble in paradise.  I doubt this is true, since it wasn’t really a ‘love’ marriage but a business deal LOL.

If you must know pick up the current copy of Star Magazine!