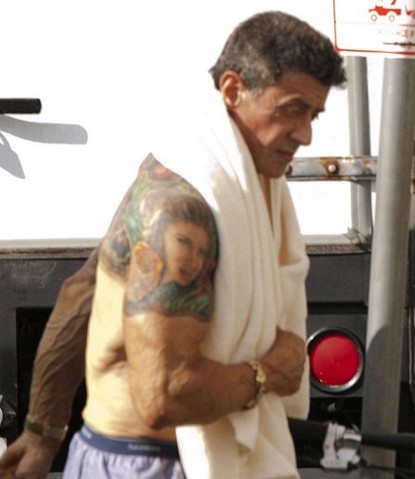 Sylvester Stallone turns 65 next week so you might think the aging tough guy would have wised up by now?    But have no fear, Stallone continues to demonstrate his adolescent fascination with his body and its increasingly frightening appearance. The star of the ‘Rocky’ series was busy showing off ridiculous tattoos on the set of his latest film – ‘Bullet In The Head.’ What a perfect title… .

Stallone walked around topless in New Orleans showing off, as he usually does, what a man can do with excessive consumption of anabolic steroids and human growth hormone.  While Stallone has sported the body art on his shoulders for several years, the back picture appears to be from a new visit to the tattoo parlor.

The portrait of Jennifer Flavin, his third wife, is painted on his right shoulder and upper arm.  Stallone went under the needle in 2007 to honor his tenth wedding anniversary to the former model.  Three roses are dotted around her face to symbolize their three daughters Sophia, Sistine and Scarlet – each of who has the middle name Rose.

Down his spine is a dagger that pierced a heart bursting into flames, and the bright colors look awful next to his sagging skin.