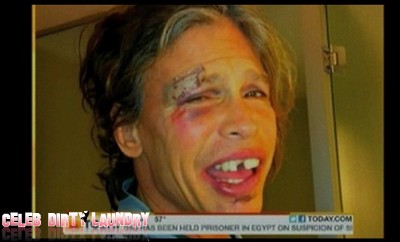 Steve Tyler claims he has not fallen off the wagon, just fallen in the shower after he “passed out” as a result of the nausea he was suffering. Without blood and urine tests we have no way of knowing whether Steve was dunk, stoned, or both – despite his denials.   Steve told ‘Today’: “I started to get sick, and I just fell on my face. I just passed out.”

Steve has previously battled serious and long-term alcohol and drug addictions and says he can understand why people may have assumed his fall was due to inebriation.

He said: “I get that people think that. It still bothers me a little, but it’s something that I have to have to deal with for the rest of my life.”

Steven was thrilled by the medical treatment he received, which meant he could return to the stage last night.

More:  Does Bathroom Fall Say That Steven Tyler Was Inebriated?

He said: “It was like one-stop shopping. They stitched up my eye. They did a little plastic surgery. And they fixed my tooth. All in one fell swoop.”   Was that last sentence of Steve’s meant to be a pun?

Do you buy Steve’s story as to why he fell?