Steven Tyler & Joe Perry Reconcile To Bring Aerosmith Back Together 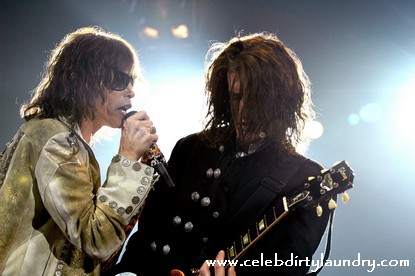 American Idol judge Steven Tyler has made up with his Aerosmith bandmate Joe Perry so they can perform together for the final of ‘American Idol.’ The 63-year-old rock star – who sits on the judging panel of the talent show – got into strife with Joe in 2009 because he wanted to take a break and was told a new frontman might be found to take his place.

Now the pair have made amends so they can return to the spotlight and are exchanging emails containing ideas for new songs.

The ‘Walk This Way’ singer told Billboard magazine: “Well, I sent Joe a bunch of songs and he sent me a bunch of licks.”

“We’re getting together for my father’s birthday – he’ll be 95 – in May and I’m gonna have a band meeting at which time we’re gonna settle a lot of the tumult that’s been going on in the last year between lawyers and managers…  .  As John Lennon said, time for a new broom to sweep things clean, dahling!”