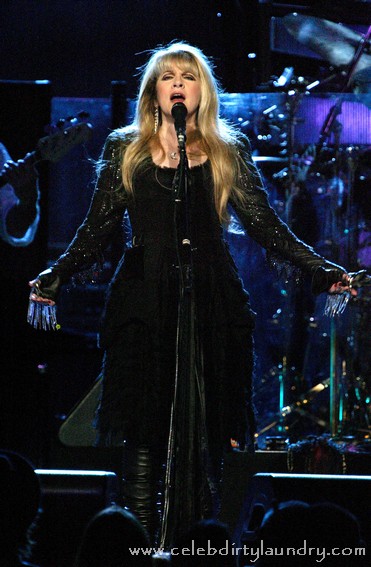 Robert Pattinson and Kristen Stewart have hordes of ‘Twilight’ fans and some of them are celebs in their own right.  Stevie Nicks was apparently so influenced by ‘Twilight’ that the vampire saga even inspired her to do her first album in 10 years.

“I had written a song in Brisbane, Australia when I was on tour with Fleetwood Mac in 2009 called ‘Moonlight – A Vampire’s Dream,” which was inspired by the ‘New Moon’ film,” said Nicks. “When I finished writing that song, which came together really quickly, I knew the time was right to start recording.”

Who would have thought Stevie Nicks was a Twi-hard?  Stevie Nicks fans should be grateful to Robert Pattinson and Kristen Stewart for influencing the accomplished artist to get started on a long overdue music album.  Stevie Nicks’ new album, In Your Dreams, and its Twilight-inspired track is due out this spring.

Is a Breaking Dawn single from Stevie Nicks next?  Will Eminem do a vampire rap?  How about Ozzy Osbourne?