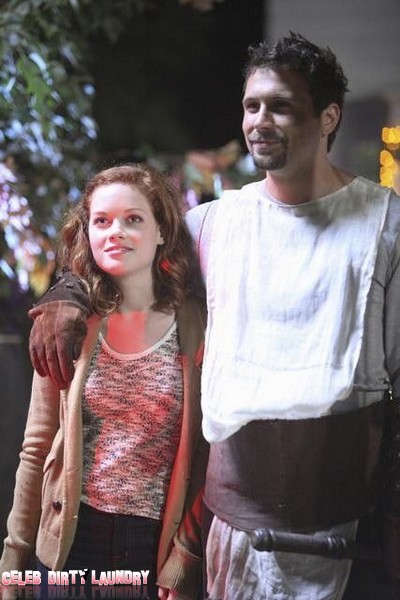 Tonight is the fifth episode of ABC comedy Suburgatory and we’ll be covering the show live!  From the official synopsis of tonight’s episode, titled, Halloween: Episode Synopsis: George tries to change Dallas’ low opinion of Halloween by showing her the fun side of fear, but he’s in for a shock when her frequently traveling husband (Jay Mohr) comes home unannounced. Meanwhile, Tessa’s costume rubs the locals the wrong way.

George is outside with Tessa decorating the lawn for Halloween and she starts to reminisce about when she was younger and in the neighbourhood she grew up in, people were killed for real. Noah shows up and sees Tessa in the pretend guillotine and asks Jeremy if they got the decorations approved by the neighborhood committee. Tess decides that she is going to find a costume that makes a mockery of her neighbors. She looks in the closet and finds a box called ‘Misty’ and decides to dress like her in velour and bumps her hair

To read the rest of the recap head over to our sister site,  Fit Fab Celeb