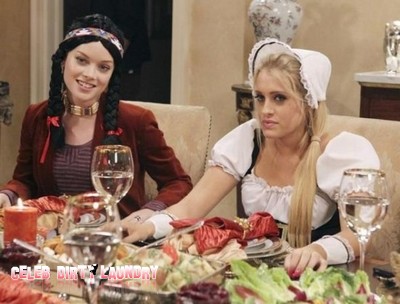 A whole new episode of Suburgatory airs tonight on ABC  The eighth episode is a festive one and it is titled “Thanksgiving” because it is Thanksgiving in Suburgatory!  Stay tuned as our sister site Fit Fab Celeb covers the show with up-to-the-minute details.  Last week was the 7th episode of “Suburgary” titled “Sweet Sixteen”. Tessa wanted a small birthday party but Dallas convinces her to let Dalia plan the ultimate party and she goes a little overboard.  Did you miss my the episode? If so, you can catch the full recap HERE.

Episode Synopsis: Depressed that she has to spend Thanksgiving in the suburbs, Tessa convinces Dallas to take her to the city for a girls’ day out. During their fun day, they run across George making out with a woman while he was supposed to be “working.” Angry with George for lying to her, Tessa confronts him during the Royces’ Thanksgiving dinner. Meanwhile Lisa refuses to wear a special dress Sheila picked out for her, so Sheila decides to literally turn up the heat, on “Suburgatory.”

The show airs tonight at 8:30pm on ABC, head over to our sister site Fit Fab Celeb, and she will be live recapping the show!