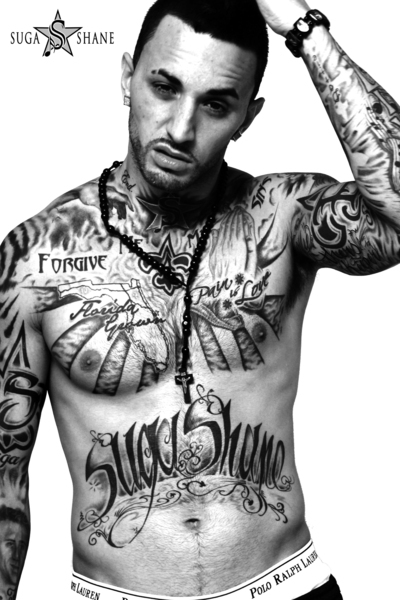 Fellow musician Suga Shane is speaking out in defence of his friend Chris Brown after Tuesday’s incident when Brown stormed out of the ABC studios in New York and smashed a window causing glass to crash to the street below just because he wasn’t happy with question put to him during a tense interview with Good Morning America anchor Robin Roberts.

In an  interview Suga said: “It’s better Chris Brown did it to a window rather than a person.”   This shows you where Suga’s mind is at.  The incident occurred after Roberts pressed Brown about the assault on his then girlfriend Rihanna, obviously a touchy subject still for the 21-year-old singer.

“He’s a cool regular guy until someone pushes his buttons,” Suga had the gall to say.   “I can understand his frustration, he’s addressed the Rihanna incident and he’s apologized, he’s been asked so many times about it and it’s getting old, he doesn’t want to talk about it.”  After repeatedly trying to dodge questions regarding the brutal 2009 assault, Brown finally stormed out of the studio and the window in his dressing room was later discovered smashed – reportedly by him.

Suga says his friend’s reaction came from being pushed to talk about something Chris feels has passed.

“He understands that he made a mistake in the past, but revisiting it really makes him angry.  “It’s not right that he smashed the widow but he did remove himself, and it’s better that he did it to a window than a person.  “He was expressing his frustration with the situation, he’s trying to move forward into a more positive light.  “He could have done this in public, but instead he waited until after the interview.”

Suga says the incident with Rihanna is not a subject that is discussed among Brown’s friends because they have moved forward and hope his fans can do the same.  “None of his friends talk about that stuff anymore, we don’t talk about it.  “If Rihanna is able to get past it, then America should be able to get past it too.  “This entire thing has affected his life drastically.  He had a squeaky clean image before and he has put all his efforts into having a clean image again.  It’s always going to be a touchy subject.”  “He’s a regular person who makes mistakes like everybody else, the only difference is he is in the spotlight.”

News Flash to Suga and Chris: Regular people do not beat up their girlfriends and get arrested and sentenced for doing so.  Chris Brown continues to show that he is an immature punk with violent tendencies who has learned nothing from the Rihanna incident.