BY Shannon Rose on May 28, 2011 | Comments: Leave Comments
Related : Sunshine and Bullets 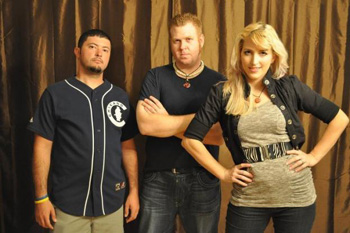 The “triple threat of awesomeness” that is the exciting new music trio Sunshine and Bullets is rocking Florida, up and down the Gulf coast of the Sunshine State.

The alternative rock group, made up of vocalist/guitarist Amanda Lethal, Richard Thee Ginger and Wolfie, just kicked off a Florida tour that opened in Clearwater on May 21.

These sensational national recording artists are in the midst of rocking the Gulf coast in concerts that sometimes also raise money for charity.

Sunshine and Bullets’ first stop in Clearwater was “Rock the Park,” a benefit concert for The Center for Independence and The Justin Gaertner Fund, named after the former graduate from J.W Mitchell High School who was recently injured in Afghanistan.

“We’re all about helping out our community and non-profit organizations around the country” says Amanda.  “It was an excellent start to our upcoming tour and we’re excited for the opportunity to rock the coast!” adds Rich.

The Florida tour is to help promote Sunshine and Bullets’ debut CD, “The Fight for Andromeda” due out this summer. The album features the hard-driving single, “I Like Your Style”.

You can groove to Amanda’s blistering voice and rock with the pulsating guitar riffs and rhythmic drums of Richard and Wolfie at these locations around Florida, with more dates to come: