Survivor Redemption Island – Week TEN Recap & Who Was Voted Out? 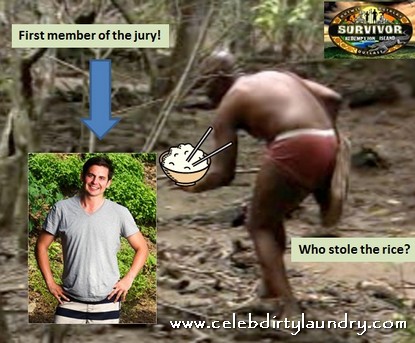 Our guest blogger, Rosie, from Fit Fab Celeb, provides us with a recap of tonight’s episode of Survivor Redemption Island.   Tonight’s episode is titled “Rice Wars” because one alliance’s food supply is contaminated which ensues a heated argument at camp and an explosive tribal council.

The episode begins with Matt back on Redemption Island trying to preserve his sanity by speaking to Jesus!   All three, Mike, David and Matt are wondering if it will be dual with the three of them against each other this week to compete to stay in the game and avoid being the first member of the jury.

Zapatera has a lot of rice left and are really enjoying it, Phillip catches on and takes on the role of Rice Police; he steals some of it for the Ometepe tribe.

All the tribe mates are headed to Redemption Island to watch the competitors for the dual; Matt, Mike and David. Each will have 150 wooden tiles to build a traditional house of cards, the first person to build it to eight feet will remain in the game and be the first member of the jury. Mike and Matt stay alive, David after 25 very tough days, his shot at the million dollars is over – but he is the first member of the jury.

When Ometepe arrive back at camp, they discover that there are maggots and mold in their rice. Having nowhere to put the rice, Phillip asks Steve if he can put their rice in the Zapatera rice can and he is told no. Phillip freaks out and says he will do it anyway and Steve calls him a lunatic. Then, Phillip pulls the race card, here’s the play by play:

Phillip: “Look, you guys aren’t being reasonable. When some white folks they like to take a black man, and make him crazy when he makes an argument that you don’t want to hear!”

Steve: So you’re making it a black, and white thing now??

Grant to Rob: He just brought the race card

Rob: Did he really?

Steve laying in shelter, to Philipp: You’re a lunatic

Philip to Steve: Anytime somebody of my color gets up in one of your faces then you feel like I’m a lunatic, I’m crazy. Yeah, I think that is what this is all about right now, between you and me!

Grant to Rob: This is like watching Divorce Court

Crazy! Phillip took it all the way to the ‘N’ word. Rob is stunned that Phillip managed to start a war over rice and is now labeling him Public Enemy Number One, now he just needs Public Enemy Number Two!  Hilarious, no matter what, Rob has these people right in the palm of his hands.

[8:52:03 PM] Rosie LeBlanc: At the Immunity Challenge, the tribe mates must build a multi-stage puzzle wheel, the first six to finish will move on to the next round where they will have another puzzle and the first person to finish will win immunity. Steve, Rob, Ralph, Andrea, Julie and Grant battle to the finish, the Lord and Master, Rob wins immunity!

Zapatera has their eye on voting out Phillip and Julie, for whatever reason, decides to hide his underwear and Phillip knows they were taken by someone and let’s them all know it. I personally wouldn’t mess with a guy who wears pink underwear and a feather on his head! Rob is undecided who is going home tonight and says “One man shouldn’t have this much power on an island, but I’m happy I do”.

At Tribal Council, Jeff notices that Phillip is missing his shorts and Phillip says that he knows it was Steve who took them and then everyone goes on about the Rice War. Zapatera tells Jeff that Phillip threatened them with martial arts and brought up the ‘N’ word. Phillip goes on to explain that every time the tribe calls him crazy they really mean the ‘N’ word. Jeff asks Ron how you go forward at Tribal Council with all this going on in the tribe. Rob says it is tough, but people have disagreements about things and it is going to make an impact on the game. Jeff asks who took Phillip shorts and Julie admits to taking them but says she is not giving them up!

Time to vote. Phillip has 3 votes, Julie has  4 votes.  Julie is voted out.