Survivor Redemption Island – Week ELEVEN Recap & Who Was Voted Out? 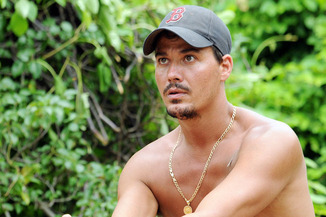 As Survivor Redemption Island is on its eleventh week we can’t help but expect to see the final two Zapa members headed to the chopping block. The only real question is whether it’ll be Steve or Ralph to go this week. Even if one gets the Immunity, the other will go.  We’ll also get our first look at Ponderosa as David heads there to become the first member of the jury.

Previews for tonight suggest Matt’s resolve could be weakening and we have a mystery package twist. Could more than one person be headed to Redemption Island again?

The members of the tribe are saying that was a crazy tribal council. Steve says “Hey Philip I would like to reach out an olive branch you are a man you said what you had to say “ Philip did not feel it was genuine. Phil felt it was self-serving and says Steve will probably go next.
Munlonio Tribe, Steve said he reached out and hopefully they buried that. Steve says he wants to make the remaining days as easy as possible on everyone. Philip is saying he was nervous. Rob said Philip is under his protection and as long as he stays behaving stupid he is under his protection.

Where is numbnuts LMAO (referring to Philip)  he went out to the big rock Philip said eystewday his trunks were hidden by Julie and when he woke up he felt he would find them. He says he had a vision where they were. So he starts digging and lifting rocks and finally he found them. He said “am I good or not”

He comes back and tells the others let this be a warning it is futile and stupid to hide anything on him . He is the specialist.Steve says “Congratulations we are at peace. ” Philip is so excited to show up and show Julie he has his shorts. He is the undercover specialist. (he keeps saying over and over again)

Mike is saying Matt has incredible strength and since after he went to Redemption Island he is going a bit downward he is at his breaking point. He is already thinking of going home. Coming back from Redemption Island was very hard on him.

Matt is saying it is not like anything he eer experienced he can only feel them when he really tries. He says God has him here for a reason he does not know why. He is crying and he is losing it.

The tribe heads to the three people who are competing in the duel today Matt, Julie and Mike. It is Survivor Shuffleboard. Matt is staying alive on Redemption Island and so is Mike.  Julie is the second member of the jury.

The girls are talking about how Matt did not want to play the game.  Andrea feels bad because she played him.  Rob say they all put him there.  Andrea feels she broke his sprit not on a game level but on a human level.

Rob is talking about Andrea with Grant and he would be glad for her to go next.  Grant is concerned about Matt and Andrea’s relationship.

Today’s immunity challenge they will compete in a log roll.  The goal is to stay on the log longer than the other person.  The one who stays on the long the longest wins immunity.  They are also playing for reward – a giant chocolate cake and ice cold milk.  There is one other twist that they will find out about later. The winner of immunity is Grant.

Grant chooses Boston Rob to join him to eat the cake and drink the milk.  Then he chooses Andrea to join them.  He then gives them the twist – he says don’t open it just bring it to tribal council.

Grant, Andrea and Rob are told they have 2 minutes to eat the cake.  Grant says he chose Andre for strategic reasons he wants her to feel comfortable.

Rob feels Steve is safe so he can say because Steve has given up but he feels Ralph should go because he is still a threat.  Rob is telling the tribe that if there is a twist and they have to vote people out than Andrea should go.   They all feel she should go because if Matt comes back from Redemption Island Andrea likes him.

Steve is trying to convince the two girls to vote Rob out.  The girls head over of course and tell Rob what Steve said.  Now Rob is thinking they should get rid of Steve first because Steve is gunning for him.

Now lets get to the twist. You will now compete in your next immunity challenge, you will immediately vote out another tribe member.

Each of the members get a stack of cards – they have to get familiar with them.  They are going to see a series of symbols and have to repeat them.  Rob wins immunity.