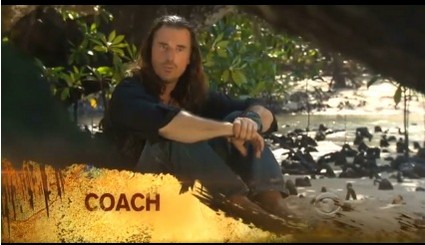 Tonight is the second episode of Survivor: South Pacific and the episode is called ‘He Has Demons’.  Will Ozzy be able to lead his team to victory tonight or will Cochran his weakest player drag the team down?  Will Brandon be able to keep his evil family legacy a secret or will Coach The Dragon Slayer convince him to reveal his secret ?

It will all be revealed on tonight’s episode of Survivor: South Pacific.  Tonight’s show opens

The team is upset they certainly do not want to go back to tribal council again.  Cochran is worried about the impression that the tribe is getting about him and he tells the tribe he is willing to change.    Ozzy feels Cochran has to understand he needs to put in an effort or he will have to go.  Ozzy is hoping that Cochran will be an asset in the puzzle area of the game.  Keith really likes Ozzy but knows he has to watch him like a hawk.

Cochran is really working to make people think he is worth keeping.  He realizes he is never going to be Ozzy but he believes he can help the team.  Ozzy is looking for the idol, he wants to find it.  He climbs in the trees like a monkey, he is so agile and he finds the immunity idol.  YAY! we love Ozzy.    Ozzy says he knows what to look for now since he has found an idol in previous games.  He hopes he can keep it until the merge and thinks this can help him win the game.

Coach feels right off the bat he is on outs with his tribe.   But it did not take long for  Coach to think he has a solid alliance with Rick, Sophie, Brandon and Albert.  He is nervous about someone maybe finding the immunity idol.  Brandon really likes Coach and thinks he is a really good guy and he feels like a hypocrite because he has not told him he is Russell Brand’s nephew.  I cannot believe it he takes a walk with Coach and tells him Russell is his Uncle.  Coach is shocked because Russell lied to him in the game when they played together.  Brandon tells him he wanted to tell him because they have an alliance.  They pray together.

Mikayla is talking about how the hardest part of the game is the social duh…  Brandon does not like Mikayla he thinks she is using her seductive way to get attention.  He thinks the ones that are good looking and seductive that you have to stay away from.  He wants to get her vote off soon.

Christine is looking for the immunity idol because Jeff told the tribes at the last tribal council there was an idol.  Everyone is worried about the idol and the think Christine may have it.    They would be wrong, she does not have the immunity idol but she did find a clue in a true to where the idol is.  She has to decide whether she will tell the team.

Immunity & Reward Challenge  – The Upolu Tribe was in the lead for most of the challenge but the Savaii Tribe ended up winning.  The prize was blankets, pillows, a hammock and a clue to the immunity idol when they get back to the beach.

Brandon wants Makayla to go home, he feels uncomfortable around her and wants to get rid of her.  But he will go with the team.  Coach does not want to vote her out because she is the strongest female player.  Coach tells Brandon that Christine is not good in challenges but Makayla is.

Coach is telling everyone at the council that they wanted to vote off Makayla.  Everyone is shocked, but Coach tells them all the gloves are off.   Coach tells the team he does not want Makayla to go home but Stacey and Christine do.  The two girls are denying it.  Coach tells Jeff that Christine has been looking for the immunity idol.  Christine feels that Coach is threatened by her.  She feels Coach feels upset because Christine said on day 1 that Coach was temporary.  Brandon decides to come clean  he admits he told Stacey and Christine to vote for Mackayla.

Jeff says there are so many factions in this happy family and you never know who is telling the truth.

No one comes up with Immunity Idol.

She is headed to Redemption Island!