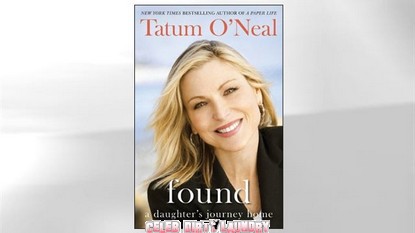 Tatum O’Neal might like to play the role of the wounded and vulnerable daughter and wife but when it comes to the commercial capitalization of her life and sorrows she is a shark.

Found: A Daughter’s Journey Home (William Morrow, $25.99), her second memoir, is out today, timed perfectly to coincide with the docu-series “Ryan & Tatum: The O’Neals,” which has its premiere Sunday night on OWN: the Oprah Winfrey Network.

In her best-selling debut memoir, A Paper Life (2004), she told of her rough-and-tumble childhood, her drug addictions and her highly dysfunctional relationship with her father, actor Ryan O’Neal.

Confessing that her first memoir “wasn’t remotely healing” and that she was “still too broken,” O’Neal says this second memoir, and the reality series, were done in hopes of reclaiming a father/daughter relationship after a nearly quarter-century of estrangement. Give me a break – they were done in the hope of making lots of money.

“This book is about rebuilding a life,” she writes.

“I am telling everything,” she writes. “The truth. The struggle. The hope. The love. I believe it is the right thing to do.”

She starts with her infamous 2008 drug arrest on the streets of New York. She moves on from there: her kids, her gay friends — “I do best with gay men” — her years of warring with ex-husband John McEnroe, her heroin addiction and of course, her relationship, or non-relationship, with her father.

As she said, she’s telling everything. She’s on a journey.

Does she take us for fools? Tatum has turned her addictions and turbulent family life into a cottage industry – should we even care anymore? Does she?