Taylor Lautner’s Battle With Kristen Stewart Is His Favorite Scene 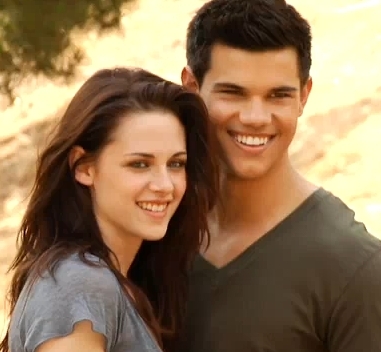 The world’s favorite wolf, Taylor Lautner, was interviewed and he revealed the secrets of his favorite scene.  Despite talk inevitably turning to Taylor Lautner’s upcoming action flick ‘Abduction’ during his interview the questions everyone was dying to hear answered had to do with two other big movies he has on the horizon: “Breaking Dawn: Part 1” and “Part 2.”

The “Twilight” cast and crew have been filming the final two installments of “The Twilight Saga” since the fall, so it was time to hear Lautner say which was the most exciting scene to film.

“It’s really hard to choose because we’re filming two movies so we’ve been filming for five months. There’s been so much we filmed,” he explained.

Taylor admitted that there was one scene in particular that he shot not too long ago that he was a fan of because it was unlike any other that he’s filmed with co-star Kristen Stewart.

“Recently we did a scene in the backyard of the Cullen house where Bella (Stewart) gets mad at me,” he said. “She just learned that I imprinted on her daughter, and she is literally throwing me around the backyard.  So it was pretty fun to see Kristen try and act all tough.  She’s a vampire; she’s chucking me across the yard into trees and stuff.  It was funny.”

Taylor told MTV News that he thinks that by the time “Breaking Dawn” ends filming, there will be plenty of waterworks across the set.  “Nobody will admit it right now, but I guarantee you there will be tears,” he said.