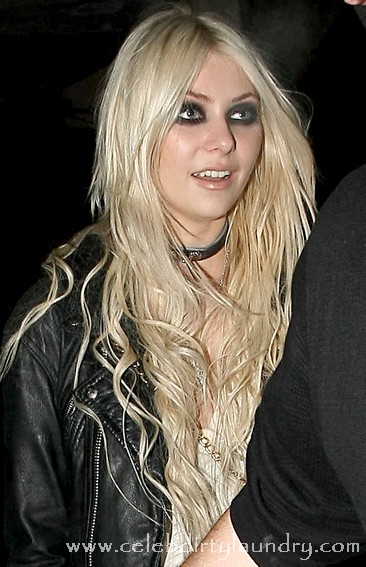 It looks like Gossip Girl and lead singer for The Pretty Reckless Taylor Momsen, 17, is headed to X Factor.   X Factor is Simon Cowell’s much anticipated American version of the UK show.  Apparently the producers of the show are interested in Taylor and want her to co-host the show.

Celebuzz has the scoop:

Earlier this week, uber-producer L.A. Reid officially signed on the dotted line to sit at the judge’s table.   We’re told that producers think the often-controversial Momsen is perfect for the spot because she’s “young, hip and edgy” and has just the energy the show is looking for.

Taylor who was recently replaced as the ‘it girl’ of Madonna’s clothing line Material Girl by Kelly Osbourne certainly is controversial.  However, stunts like lifting her top up and swearing like a trucker may not go over well on the show.   Taylor recently said her favorite swear words are  “F**k and C**t.  I use it in every f**king sentence, there you go, you c**t.”  Nice girl!  What happened to Cindy Lou?  Celeb Dirty Laundry wants to know – what do you think of Taylor as a co-hot on X Factor?