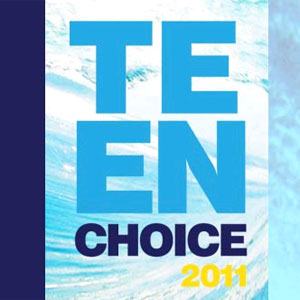 The 2011 Teen Choice Awards were on last night, and some of the Celeb World’s hottest stars took home the borderline impractical (but totally awesome) life-sized surfboards. Who needs a shiny golden man (AKA “Oscar”) when there’s a totally rad surfboard you can hang on the wall above your trophy case . . . am I right, TaySwift? I single my good friend (I wish) T. Swift out because she walked away with six awards last night. SIX! Hot damn! Why don’t you just start taking over the world right now, girl :)

Overall, the show was great. Naturally, I love awards shows. And the Teen Choice Awards are, hands down, one of my favorite of the year. Kaley Cuoco was the host this year. While most will recognize her as the blonde from the Big Bang Theory, I will forever associate her with the old T.V. series Charmed. She did a great job and brought just the right amount of energy, wackiness, and stupid-joke-telling to the stage.

So who won what? Below are just a few of the night’s hottest awards.

Choice Movie Actress Romantic Comedy: Emma Stone, “Easy A.” So happy about that one — I <3 Emma Stone.

Choice TV Villain: Justin Bieber, “CSI.”  [?????] C’mon, it’s just because he’s The Biebz. No other awesome TV villains out there?

Ultimate Choice Award: Taylor Swift. Taylor swift sat next to Selena Gomez and The Biebz (let’s just say the cameramen were showing us their reactions alot that night. Three of the world’s hottest teen celebs in the same row *GASP*)

I think the above award category should be inducted into all award shows. For an exhaustive list of awards, CLICK HERE. The show closed with Kaley telling everyone “Goodnight, and adopt your animals, people!” So, guess what I’m going to go do tomorrow? I’m going to adopt THIS.

Did you guys watch the awards show? If so, what did you think? Tell us in the comments section below!