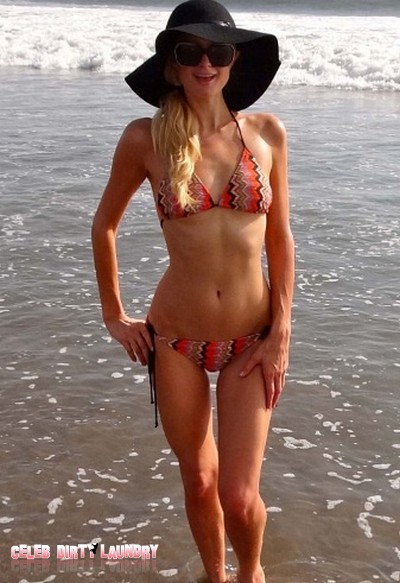 Paris Hilton smoulders in a tiny bikini on the beach in Hawaii.  Paris is on vacation and having fun in the sun and enjoying herself.  She was spotted jet-skiing in Maui, Hawaii yesterday with DJ Afrojack.  We have some pictures of Paris jet-skiing below.

Paris is said to be in Hawaii with friends to see an Afrojack concert and to shoot her bikini calendar.  She tweeted today about the shoot, ‘Been on the beach all day shooting my new bikini calendar.  Loving all the hot bikinis I’m wearing. Love photo shoots in #Hawaii! #YES!’

Paris wrote on her website about her trip: “Having the best time in Hawaii. Love relaxing, walking on the beach, jet skiing & just chilling out. Also went shopping here yesterday and got so many cute things. Loved all the art galleries too, bought some cool disney artwork of Tinkerbell. It’s nice to get away & have fun adventures. “

There have been rumors that Paris and Afrojack are a couple, but the rumors are not true, Paris and Afrojack are just good friends.  Paris spent the summer working with Afrojack on her singing and a new album.  The album would be a follow-up to 2006?s Paris, which reached number six on the US album chart and gave birth to her UK top five hit ‘Stars Are Blind’.

Paris is single and she is said to be ‘She’s the happiest she’s ever been right now and loving being single.’  Good for you Paris, you deserve it.

Click on the thumbnails below to enlarge more pictures of Paris in Hawaii!