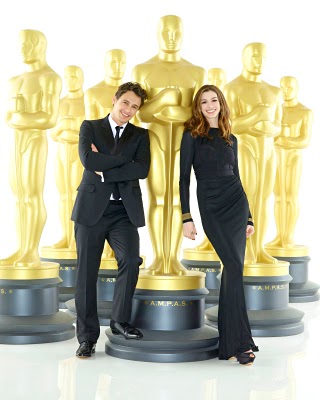 Get your popcorn out and your votes ready, the 83rd Annual Academy Awards are just around the corner!  This Sunday as we all anxiously await to see the who’s who of Hollywood, it’s always undecided as to what we want to see more; who will walk home with the coveted golden statue, or….who will hang their head in shame and take home the worse dressed award.    OK, maybe the latter isn’t as big of a deal, but it’s pretty high up there (remember Bjork’s 2001 Marjan Pejoski Swan dress?  I do suppose it could work this year for Natalie Portman).

I for one am very much looking forward to this year’s ceremony, not only because of the amazing films and talent being recognized, but also to watch not one, but two hosts entertaining the crowd; 32 year old James Franco, and 28 year old Anne Hathaway – the youngest hosts ever.  The “127 hours” star and the “Love and Other Drugs” star revealed recently to Good Morning America that they both turned down the offer to host Sunday’s Oscars but it was ‘chemistry’ that brought them together.  It’s been clear after watching the many surfacing YouTube videos that the two need not worry.  One of my favorite promos between the two has Franco tackling Anne to the floor after a ‘wardrobe malfunction’ (Janet Jackson attack maybe?).   There’s also been talk of a Danny and Sandy ‘Grease’ montage (Franco recently posted images to his Twitter page) but either way, both actors admitted to several song and dance numbers that  the audience can look forward to.  Young, pretty, and smart – Anne reminds me of a young Julia Roberts whose star is no doubt going to continue to rise while James, well I don’t even think I need to go there – just look at the guy!  And really, as if he needs to do General Hospital, the guy clearly loves acting and having fun at his job which I consider the best way to achieve longevity in the crazy world of Hollywood.  Well, that and don’t do drugs.

I’ve been a fan of these two young stars for a while, both never cease to prove their amazing talent, wit, and charm in front of the camera.  I think it’s safe to say thus far that those glued to their television on Sunday night are in for quite a treat.  Although no one in my book can ever top the wonderfully brilliant Billy Crystal,  I’m banking on Anne and James to be a close second.  In the words of telecast producers Bruce Cohen and Don Mischer, “James Franco and Anne Hathaway personify the next generation of Hollywood icons – fresh, exciting and multi-talented.”  Looking forward to it!

Visit Celeb Dirty Laundry tomorrow and we will have ALL the Red Carpet Arrival Pictures.