The Bachelor – After the Final Rose – Shocking RECAP 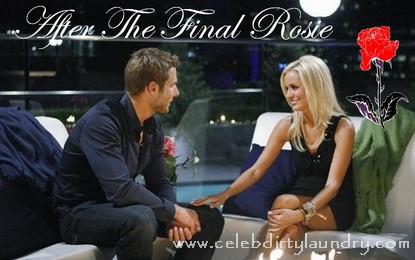 So here I thought The Bachelor was finished.  But Rosie at Fit Fab Celeb told me there is more…. What happened since that happy day in South Africa?

Chantal has not seen Brad since South Africa, he comes out on stage and gives her  heartwarming hug.   Brad is clearly awkward and Chris gives her the floor to ask him questions. C  hantal asks him at which point did he know that it wasn’t her.   Brad admits he loved Emily early on and doesn’t want to hurt her feelings, but assures her that what they had is real and doesn’t want her to be upset.   Chantal can’t stop herself from crying and tells him that she doesn’t want him to discount what they had and tells him that she has found someone that she is in love with since leaving South Africa.

Chantal has left the stage. Brad is left alone with Chris who tells us that today was actually supposed to Emily and Brad’s wedding day.   Brad admits it is true but blames the tabloids for the not happening.   Brad goes on to say that he is in love with Emily, considers that he is engaged to her still and will fight tooth and nail to have her.   Chris asks if it is true that he and Emily broke up at one point and he says yes.

Emily comes on stage and Chris gets right to the point, does she still love him.   Emily admits that she loves Brad and considers that she is engaged to him, although she is not ready to get married yet because they need to figure things out first; basically she is not ready to move to Austin with him.   Emily admits that she had a hard time watching Brad with all the ladies on the show when it aired.

Chris asks Brad and Emily what has to happen for the relationship to move forward.   Emily tells Chris that Brad’s family warned her about his temper and that is one of the problems.   Emily is still trying to separate reality tv with her reality and wonders if Brad was in love with her from the beginning like he claims, why wasn’t there special things/moments just for her on the show.   Emily regrets not being in a relationship for a long time before Brad because she has a problem giving.   Brad regrets that he loses his temper and doesn’t want Emily to feel anything less than love. Chris asks Emily if she see them getting married one day and she says yes.

Emily went through, Trista and Ryan (married for 7 years), Molly and Jason (married for 1 year), Ali and Roberto, and they are all there.

Jason tells Brad and Emily that he can relate to what they are going through because he was a parent as well. Molly tells them to focus on themselves, not the blogs and tabloids. Molly admits the Monday nights were hard.

Ryan tells Emily that even though she is going through a tough time, he is sure that it is worth it in the end. Trista tells them that what they do with their relationship after the show is what is important and she hopes they will become best friends in the end.

Ali tells them that Roberto is what held her together. Roberto says it is communication thing that will keep them together.

Final words from Trista, she hopes Brad and Emily work it out.

Brad and Emily have never seen their engagement, Chris airs it for them and the two are clearly very touched emotionally. Brad pulls out Emily’s engagement, he had it sized, and puts it back on her finger.

Chris tells the happy couple that he looks forward to a wedding soon.