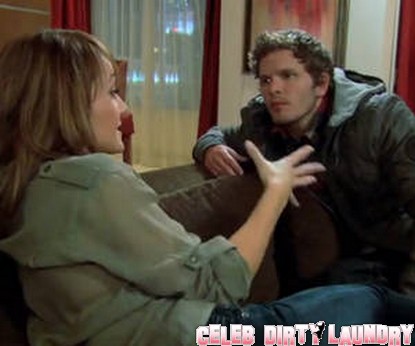 Get ready for another episode of The Bachelorette, producer Mike Fleiss tweeted that episode 2 tonight is the best one ever!  If you missed the first episode you can catch our recap HERE.  Apparently Ashley Herbert begs Bentley to stay on the show if he has “any” feelings for her whatsoever, is she nuts? (picture above of her begging)   The guy only loves himself.   In another sneak peek, Will goes with Ashley on a one on one to the Bellagio Conservatory, steals a kiss and gets a rose from her.   The best part of tonight’s show, is a glimpse at the “Jabbawockeez”… I won’t tell you anymore. Lastly, apparently, Bentley gets a rose and proves my theory, that Ashley is an idiot.   On to your recap by Rosie from Fit Fab Celeb, for the full story:

Tonight’s show begins with Ashley gushing over how excited that she is the Bachelorette, ugh. The first one-on-one is with William, the salesman from OH.   They two get in a car and drive to Vegas – not really, they drive to the airport and get in a private jet.

Creepy Jeff, still has the mask on – he declares he is not taking it off until he has a one-on-one with Ashley. He better hope it comes soon, otherwise with the sun in LA and being outside, he’s going to get a permanent mask tattoo on his face.

Ashley and William arrive in Vegas and get swarmed by fans snapping pics.  First stop is a cake shop and William is beginning to freak out when the Chef asks him how many guests for the big event.   Next stop, the jewelery store to pick out rings and William is really getting nervous as they inching closer to the real thing, a wedding.   Last stop, is the chapel with a minister in full robe and William is really nervous. A  ll of sudden, Ashley comes down the isle in a short white dress – the minster asks William if he will take Ashley, yada, yada and he says yes.   Ashley is surprised and needs to back out quickly because this could be a legal binding wedding. (This part has to be the stupidest thing I have ever seen on any episode of the Bachelorette – there is something seriously wrong with this girl. Testing a guy for marriage on the first date, insane.)

Next surprise for William, they are having dinner in the middle of the Bellagio fountain and fans start screaming “we love you Ashley”, not exactly a private or romantic place to have dinner but it puts William in the mood to open up about his father’s alcoholism and passing. Ashely confides that her dad was an alcoholic as well, yawn.  The night ends with a rose for William, a kiss and a spectacular water display.

It’s time for the group date. The twelve guys arrive in Vegas, they walk into a huge theater and see the Jabbawockeez perform.   Ashley announces to the men that the guys will be split into two teams of six.  Each group will perform, the winning team stays in Vegas and the losing team goes back to LA. The two teams; Best Man Crew and Almost Rhythm National perform and the winner is Best Man Crew, they get to stay and perform with Ashley.

The six guys are alone with Ashley and the guys all start stepping up to get a little treasured alone time with her. West opens up about his wife passing away – very sad story and you can see that Ashley was genuinely touched that he confided in her. Bentley gets alone time and tells Ashley that he was hurt that he got the last rose last time around – meanwhile, just before sitting down with her, he confided into the camera:

“Amazing body, rocking butt, exciting competition but that is my extent of my interest in her, she is just not my type.” Ashley begs Bentley that if he feels anything for her, please, please, please stick around – followed by two more pleases. Ashley and Bentley return to the other men where she gives Bentley the rose.

Mickey and J.P. get an envelope with a two headed coin with each of their faces on either side, they flip and Mickey wins the one-on-one with Ashley. During their date, they continue the heads/tail theme and flip for just about everything – both seem to be enjoying the theme very much.

Back at the house, the men are getting increasingly annoyed with Jeff and his mask.

Back to Mickey and Ashley, they share dinner in a private setting and share personal stories about each other. It comes down to giving out the rose and Ashley proposes to flip for the rose, poor Mickey looks like he is going to faint  – luckily he wins, but Ashley confides in him that she would have given up the rose anyway. After a romantic dinner, a special private concert by hit singer/song-writer Colbie Caillat awaits the couple.

It’s time for the Rose Ceremony and all the men are feeling the tension. Ashley walks in the room and J.P., disappointed that he didn’t get any alone time, jumps at the chance and whisks her away. J.P. flips a coin to get a kiss and he wins, Ashley gives him a big smooch and J.P. is all smiles and on cloud nine.

Ok, I don’t agree with Jeff having a mask on but it’s really cruel them making fun of him when he is within hearing distance. Jeff gets some alone time with Ashley and confides in her that he has had a rocky past due to some health problems and a troubled divorce – then he seconds away from taking his mask off when Matt interrupts them.

Even though Bentley already has a rose, he moves in for the kill with Ashley – picks her up in his arms and carries her over to the fire place to make out with her. Bentley revealed to the camera that it started off good, but it sucked at the end, lol. This guys is such a player. In the meantime, Ashley reveals to the camera that Bentley ‘could be the one’! Yikes.

Going home without roses are Matt, Stephen and Ryan M. At the end of tonight’s episode, 15 men remain to battle for the next round of roses.

The guys that are still in it – hoping to win it:

Come back next week, for our full recap of episode three.