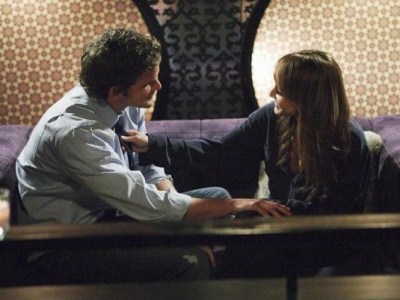 In tonight’s episode, The Bachelorette is still in Hong Kong. Host, Chris Harrisson sets the stage for Ashley Herbert finally get rid of her “dot dot dot” with Bentley who flies half-way around the world to put end end it, once and for all. If you missed last week’s episode, you can catch it here. On to this week’s summary from Rosie at Fit Fab Celeb…

So, we are down to crunch time with Ashley and Bentley. It is so obvious that this was a set up on both ends, one of the things Ashley is not good at, is acting. Ashley knew he was coming, she spends a few minutes talking with him to get her closure and that is it. It’s back on a plane and back home for Bentley. No seeing the other guys and no rose ceremony. Hasta La Vista, Baby! Hopefully this is not the best the producers have to throw at us!

Later that same day, Ashley goes on a fairytale date with Lucas. The couple walk all over Hong Kong before sharing a romantic dinner on a vintage junk boat with a beautiful skyline as a backdrop. Things take a serious note when Lucas opens about about his grueling divorce and Ashley sucks it all up and gives him a rose.

On to the next day, Ashley takes six bachelors to famed Stanley Beach, where the men participating in the ancient Chinese pastime of dragon boat racing. Separated into three teams, the men must go through the streets of Hong Kong to make up eight-man teams. Ames and Mickey win the race followed by Ryan and Blake. Constantine and Ben F. finish in third….and the group rose goes to, Ryan. Later that night, the men are get down to another competition, they compete for Ashley’s attention. A few of the bachelors make the moves on her – the guys are getting desperate.

Another day, another date. J.P. meets Ashley at the city’s legendary Victoria’s Peak Park for a special one-on-one date where their chemistry is on fire. Ashley opens up to J.P. and tells him about Bentley’s visit and of course, all that chemistry gets J.P. a rose.

At the Cocktail Party, Ashley tries to be honest with the guys and tells them about Bentley’s visit and the news doesn’t sit well with them.

Down to the Rose Ceremony, Blake and Mickey are eliminated.  Can one of the remainder hopefuls be the one?

The guys still hanging on: