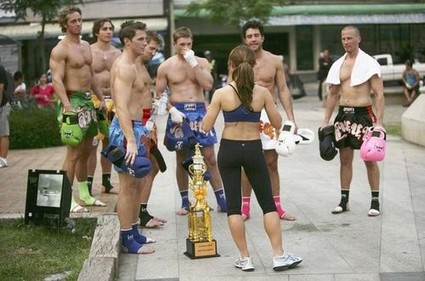 The Bachelorette Ashley Hebert is still in Thailand where she is hoping to start over and forget Bentley, what’s his name. If you missed last weeks show, you can catch the recap here. On to this week’s summary from Rosie at Fit Fab Celeb…

Still a little shocked about Bentley, Ashley is determined to show the rest of the men that she has moved on and gotten over what’s his name’s departure.   Ben F. gets the first date with Ashley. The couple hold hands in a Chiang Mai marketplace and find themselves in front of an ancient temple. Later that night, the romance between the two begins but Ben F. has trouble revealing his past to her, but don’t worry – he gets the rose anyway.

The next morning, eight of the men meet Ashley at an outdoor gym and atheltic or not, they aren’t prepared for learning the traditional Thai art form of Muay Thai boxing. Drama begins when the men learn that they will fight each other in an open-air square in the middle of Chiang Mai in front of hundreds of rooting and cheering spectators. The date takes a scaryn turn when Ames is rushed to a local hospital after a hard blow to the head. Ames suffers a minor concussion, Ryan obviously won that fight! In the other fights, Blake beats Lucas, it’s Constantine over Nick and JP over Mickey. Constantine and JP are not enjoying this and don’t want to fight anymore so the final is Blake against Ryan. Blake wins it.

At the after-party, the mood is broken by a surprise visitor. Ashley has a tough decision to make about who will get the rose, but ends up giving to the ultimate boxing champion, Blake.  Ben C. and William get the dreaded two-on-one date. Ashley takes the men on a raft ride. One man spills secrets about his competition. Moments later, Ashley sends one stunned man home and then the other by the end of the date.

An air of anxiety hangs over the cocktail party as Ashley feels she is having trouble connecting with the men. She receives comfort from one enthusiastic bachelor, but is hurt by another who confesses he is not sure if he really likes her romantically.

Ashley confides in Chris Harrison for support and moves forward with the remaining men, but Bentley still has her heart, ugh. (Obviously this is the set-up for Bentley’s return next week)  Willam and Ben C. have already gotten the boot so at the Rose Ceremony Ashley only has to send one guy home, and that will be Nick.

Eight men left at the end of the night, will Ashley really find true love? Maybe next week, when they go to Honk Kong.

The 8 remaining men are: