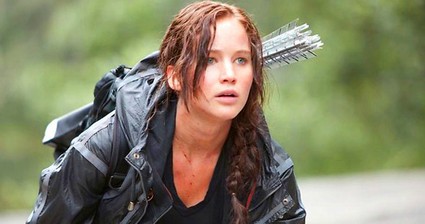 Jennifer Lawrence who plays Katniss Everdee introduced the first trailer for the movie.   The trailer does not really reveal much but it is a teaser after all.  It features Katniss (Lawrence) running through the forest and showing off her archery skills.  As the footage goes on we here Gale’s voice speaking to Katniss says “Okay, listen to me. You’re stronger than they are. You are. They just want a good show. That’s all they want. You know how to hunt. Show ’em how good you are.“

The Hunger Games is being directed by Gary Ross, and produced by Nina Jacobson. Suzanne Collins’ best-selling novel, which has over 3 million copies in print in the United States alone, is the first in a trilogy of novels which have developed a global following.  The film will be released on March 23, 2012.

Take a look at the video below and let us know what you think of the sneak peek?  Satisfied?  Does it leave you wanting more?