The Men In Black Are Back 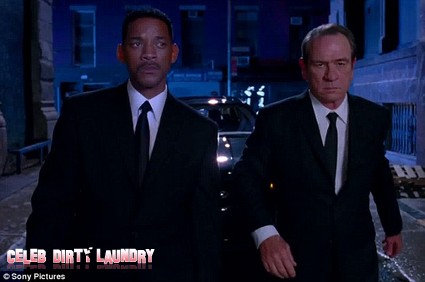 Men in Black 3 has been a long time coming – actually, almost a decade – but the countdown has well and truly begun . The first trailer for the much anticipated return of Agents J and K has been released. Check out the teaser for the time travelling and special effects extravaganza.

Will Smith and Tommy Lee Jones have some big names joining them on this third outing in the black sunglasses. They include Josh Brolin, Emma Thompson and former Pussycat Doll Nicole Scherzinger – will Nicole be ELIMINATING any dangerous characters – lol.  Josh plays the younger version of Tommy Lee Jones’s character.

Men in Black 3 – which was partly shot on location in New York – opens next May. It’s got a lot to live up to. The first movie in 1997 made $580 million at the global box office. The 2002 sequel pulled in $440 million. And don’t forget the Will Smith smash hit Men In Black in the late 90s. There’s no word yet on whether the track will get an update for 2012.