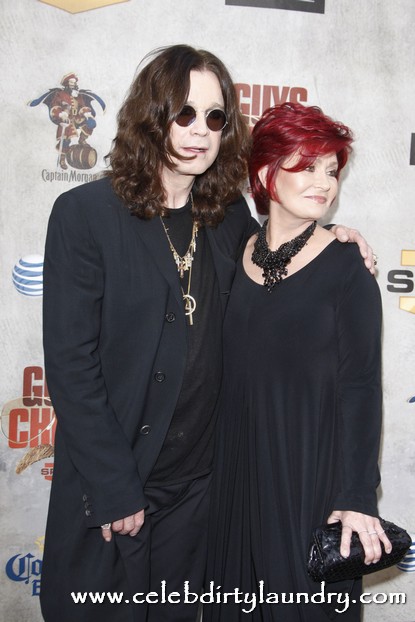 A few years ago they were ranked as one of the UK’s ­richest couples after amassing over a $150 million fortune.  But Sharon Osbourne and Ozzy Osbourne face losing one of their California homes after running up a tax bill of over $1,500,000.

Peter Haven, an American legal expert said the IRS might seize either home, and speaking to the paper today, added: ‘It’s relatively rare for someone to owe the IRS this amount of money.   ‘If the Osbournes are not able to work out a means of paying the debt in other ways, the IRS will foreclose upon the home and they will lose it.’

Former X Factor judge Sharon, who once admitted spending $400,000 on cosmetic surgery, was said to be ‘mortified’ at the tax bill.
She took to her Twitter page and admitted: ‘You can’t rely on anyone but yourself.  You have to be on top of your own business affairs.  My fault… lesson learned.’

In 2005, Black Sabbath frontman Ozzy, 62, and Sharon, 58, amassed a fortune from revenue generated by his music career with the rock band and the family’s hit reality show The ­Osbournes.  But their wealth is believed to have dropped considerably in recent years after their reality TV show came to an end and the homes they own were hit by the property crash in America.

­Yesterday a family friend said: ­“Everyone is very worried.  The ­Osbournes have always had ­buckets of cash.  But the Osbourne brand isn’t doing as well as it was some years back.’

‘The family owns a lot of properties around the world – and a lot of homes require a lot of maintenance.‘  ‘Sharon is doing everything in her power to get this settled behind closed doors. She is confident it will be taken care of.’

Their daughter Kelly is also facing her own tax woes, owing $35,000 in unpaid taxes from 2009.  Somehow we doubt that we will have to take up a collection for the Osbourne family.