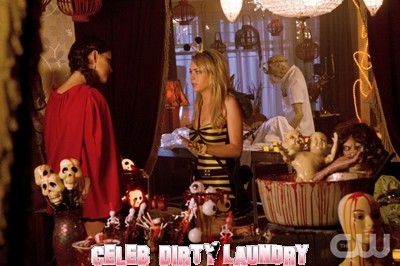 A preview for Secret Circle episode 7 has been released and it is appropriately named “Masked’ since Halloween is next week.  We have the preview of ‘Masked’ below for your enjoyment and it is exciting!  On last week’s episode Jake,  a mysterious young man, shows up in Chance Harbor and he is hot!   Jake soon learns a lot has changed since his last visit. For one, the girl he left behind, Faye has discovered she’s a witch and has plans to get even with the handsome guy who broke her heart.  If you missed last week’s episode the 5 biggest moments from the episode are here!

Official synopsis: Deciding the Circle needs to have a little fun, Faye convinces Cassie to throw a big Halloween party. Intent on wooing Jake back, Faye goes all out on her Halloween costume. After a fight with Diana, Adam turns to Cassie for advice. Meanwhile, some dangerous, uninvited guests set their sights on the Circle. Charles Beeson directed the episode written by Michelle Lovretta.

This week Halloween comes to Chance Harbor and the gang will be having a night of spookiness.  In the preview video we see that during a Halloween party Jake’s true motives will come out, yikes.   There is a whole lot more so enjoy the promo!

The episode airs on the CW on October 27th, 2011.  Check out the preview video below and let us know in the comments below what you think!