The Sheik Finally Gets A Heavyweight Title Shot 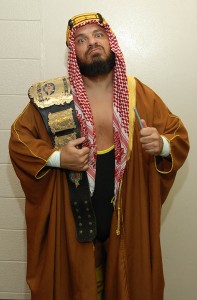 Pro wrestling superstar The Sheik is finally getting what he’s craved for nearly two years—a shot at the NWA World Heavyweight Title. It hasn’t come easily for him.

The Sheik’s seemingly never ending quest dates back to October 2009, when he was first granted, and then summarily denied, a title match against then champion, Blue Demon, Jr. At that time, Demon refused to defend the title, hiding behind insults that claimed, “The Sheik is not worthy of a title shot” and asking “Who is The Sheik?” and “What has he done?” and “Where is his resume?”

Now The Sheik has cleared all the hurdles placed before him, not the least of which was defeating NWA National Heavyweight Champion, “Universal Soldier” Phil Shatter, TWICE in order to satisfy the stipulations levied against The Sheik.