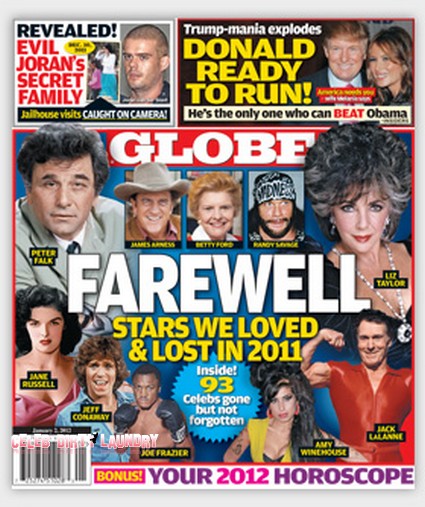 The current issue of Globe Magazine features the cover story “Farewell – Stars we Loved & Lost in 2011.”  The magazine dedicates 93 pages to celebrities that are gone but that we have not forgotten.  The stars we lost in 2011 included in the magazine are: Amy Winehouse;  Jack Lalanne; Joe Frazier; Jeff Conaway; Jane Russell; Peter Falk; James Arness; Betty Ford; Randy Savage and Liz Taylor.

Also included in this weeks issue the magazine claims that Donald Trump, 65, is throwing his hat back into the ring for the Republican nomination.   Trump-mania has exploded and La Donald is ready to run for the President of the United States!  He’s the only one who can beat Barack Obama!  At least according to Globe Magazine.

Donald recently backed out of  moderating a Republican presidential debate in Iowa later this month.   Donald said he wants to have the option to run himself if he decides he wants to.   What do you think, should Donald run for the Republican nomination?  Sound out in the comments below!