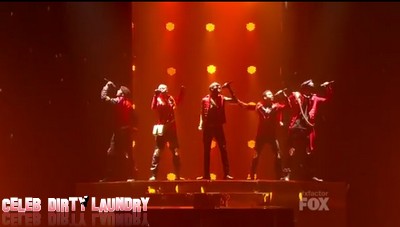 The top 12 contestants along with their mentors will battle it out for America’s votes, the The X-Factor title and a $5 million dollar recording contract in a 2 hour show.  Singing first is one of the groups, The Stereo Hogzz who will hit hard and sing hard in an epic number to Janet Jackson’s Rythm Nation.

Judges comments – L.A. said: The whole idea is do you have what it takes to be a star and you absolutely do. Nicole said: The Stereo Hogzz have landed, you representated it so well, much respect to you Simon said: Not only do I think you are one of the best groups I have ever seen in one of these competitions and I don’t think there is a band in the world better than you right now and I wish I was mentoring you. Paula said: I am so proud, you make my life so interesting, you are fantastic students.

Watch the video below and let us know what you think?  Do you think they will be eliminated tonight?  Sound out in the comments below!  Stay tuned tomorrow night as well for the LIVE results show when host Steve Jones reveals America’s votes and who gets eliminated.  To see the rest of the videos visit our sister site Fit Fab Celeb here!